The Shaw Center has shone brightly for three decades. 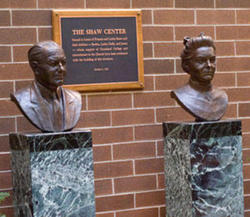 From the day the 1982 Homecoming play The Music Man premiered as the first major production in The Shaw Center for the Performing Arts to the long-anticipated dedication of the new Shaw at the 2012 Homecoming, the vision of a family named Shaw has transformed how the people of southern Iowa and northern Missouri experience the arts.

Many years and thousands of plays, concerts, exhibitions, recitals, performances, church services, baccalaureates, lectures and forums later, the Shaw Center continues to shine as the cultural hub where Gracelanders and many others gather to be entertained, to rejoice and to celebrate.

JR ’56 and Carol Shaw have made the 2012 expansion of the Shaw Center possible. The original Shaw Center was a major project that other members of the Shaw family were involved in. The late Leslie E. “Les” Shaw ‘50 (JR’s brother), his wife Lois Phelps ’50 Shaw and The Shaw Family Foundation provided major funding for what has become a great landmark on Graceland’s Lamoni campus.

It was the wish of Les, JR, and sisters Dolly Shaw ’50 MacDonald and Bertha Shaw that The Shaw Center for the Performing Arts be named to honor their parents, Francis and Lottie Shaw, founders of the Shaw Family Foundation, whose bronze busts adorn the Shaw atrium. Over the years, this icon of the Shaw family has welcomed guests to myriad events, students to classes and workshops, and faculty and staff to a splendid workplace. 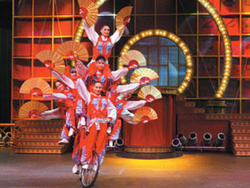 Gracelanders of all ages have experienced the Shaw Center over the years as the one place in our region where you can always expect excellence. International stars in music and theatre, dancing and acrobatics (the Chinese acrobats), and Graceland productions continue to wow sell-out crowds.

Music Professor Emeritus Dick Clothier was named the first director of the Shaw Center in 1982, a position he held for 20 years. The first official function occurred on Aug. 29, 1982, when a worship service took place presided over by then Campus Minister Rick Bunch. Joe Hanna was Graceland's president at the time, and groundbreaking ceremonies took place on Oct. 6, 1979. 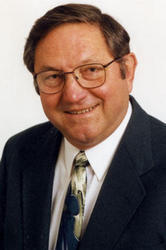 Clothier remembers many highlight events at the Shaw Center during his years there. “Each year, there were eight major visiting events called the Performing Arts Series including more than 100 individuals and families who were annual subscribers. We always tried to have at least one touring theatre production and one dance program and/or Christmas special each year. Music events were drawn from choral, opera, orchestral, solo, band, jazz, etc., whatever was coming to our part of the world in a given season.”

Clothier remembers one very special event, “The Canadian Brass flew into the Lamoni airport from Kansas City on their private plane and performed an unforgettable concert. This event was sponsored in part by the Shaw family, who, appropriately enough, were here that same weekend from Canada for the dedication of the Canadian pipe organ (described below) they donated to the auditorium. It was a match made in heaven – or in Canada!”

Clothier adds about the Shaw Center, “I am reminded that during these 20 years, I cannot recall any visiting group that did not spontaneously compliment us on our auditorium - not only the fine acoustics, but the general ‘feel.’ Many stated that they wished they could always perform in such an auditorium.” 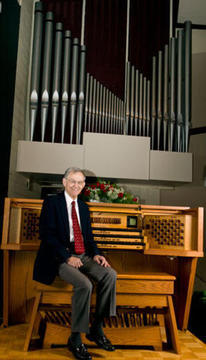 The Shaw Center Studio Theatre and Shaw Gallery have hosted hundreds of art exhibitions and intimate student/community theatrical productions over the years. There have been a lot of powerful moments, which continue through today as students, faculty and guests showcase their talents. Plays in the Studio Theatre, now the JR Theatre or 'Black Box,' continue to be favorites with students. They can get up close and support their friends who are performing. The Shaw Gallery exhibits part of JR Shaw's personal art collection of Canadian painters and artists along a north-facing hallway lined with solid windows opposite the art pieces. The Gallery is a favorite spot for guests attending auditorium events to double their experience for an evening.

Many hundreds of receptions have been held over the years in the Shaw Atrium/Lobby hosting dignitaries and providing a place of respite during performance intermissions.

Graceland awarded both Les and JR honorary Doctor of Law degrees at the 1993 commencement convocation. It was in 1995 that Les & Lois and JR & Carol gifted Graceland with the magnificent 23-rank Casavant pipe organ, which has bestowed splendor to so many Shaw Center events. Created by Casavant-Frères of St. Hyacinthe, Quebec, the beautiful oak console can be moved to any location on stage. Manual keys are dark ebony and rosewood capped with ivory; pedal keys are maple and rosewood. The 1,459 pipes, ranging from eight feet to the size of a pencil, speak from both sides of the proscenium. Organ Professor Emeritus Oliver Houston, who retired in 2004 after 48 years at Graceland, always called the Casavant “a truly uplifting gift to Graceland and personally uplifting to me, as well.”