The Gardner Roadster, Or, How Many Blogs Make A Fact?

In the course of researching a Scholars' Showcase presentation on "the car in the history of psychology," my student Waseem Limbada and I encountered, among symbolic convertibles and the origins of direct perception in J. J. Gibson’s 1938 studies of automobile driving, the Gardner Special Roadster. This (pictured above—image from Consumer Guide) was—and still is having been restored at least twice in its lifetime—the first big individual custom design success of Vincent Gardner, member of the design team headed by the eminent industrial stylist Raymond Loewy at Studebaker. Gardner revised one of Loewy’s most remembered designs, the 1947 ‘which way is it going?’ Studebaker, into an icon of car customization. Our interest was further piqued by the news that the Roadster was sold by Gardner in the early 1950’s and ended up with a person who eventually became his psychologist (!), W. Alan Canty Jr. (1933-1985) of Detroit, who had a clinical practice there from the mid-1960s until his death. According to various bits of information from three blogs: the blurb from the 2016 Mecum Auction, where the Roadster did not sell:

and the Consumer Guide blog: http://blog.consumerguide.com/photo-feature-1947-studebaker-gardner-special-roadster/,

the Roadster was in Canty’s possession for an indeterminate number of years and was sold off after his death and ultimately restored, twenty-five years later, to its current condition. Of course what’s most fascinating for us is the relationship between the Psychologist and the Car, but all we have to go on to prove this relationship, so far, is this scattering of fugitive blog notes that link the car and Canty. Question: how many blogs make a fact? We’ll pursue this further, but should you, the reader in love with mysteries, want to do so also, beware: the trail leads into some dark territory!                        — David Devonis 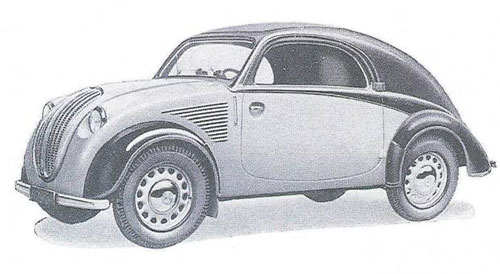 "I'm interested in art, music, cars, and psychology, not necessarily in that order. This is the most recent new thing I've learned in the history of psychology: Anna Freud — and her father too! – were the registered owners of automobiles. This is a picture of Anna's car – a Steyr 50, registered in Vienna, 1938, with the number A3523 — that was confiscated by the invading Germans in that year. (The Steyr 50, because of its diminutive size and cuteness, was nicknamed the 'Baby'.)”