The Dedication of Morden Center

On Saturday, October 16, 2021, Graceland’s Morden Center was officially dedicated in front of hundreds of students alumni, community members, and friends.

Gracelanders gathered around the north steps and listened to speeches from coaches, administrators, students, and supporters alike. Those who attended were welcomed by the Graceland drumline and the cheer and dance teams, who infused energy and vibrance into the gathering — a celebration of gratitude and excitement that will not soon be forgotten.

The message of those speeches paid homage to the generosity of the lead gifts of the Morden and Resch families, but also acknowledged that the building – the “Covered Wagon” or the “Southern Iowa Ski Slopes” – has a purpose that goes far beyond just sports.

Graceland Student Government President Casey Main kicked off the day with remarks on the Power of Community: “From watching your new friend hit a homerun in a tape ball game for your house to cheering on a great friend as they shoot a three-pointer or spike a ball over the net, I love that as a community, we come together to cheer for one another: on and off the court. Celebrating our successes and being a shoulder to lean on for our losses is valued in this place.”

Professor of chemistry Daniel Pratt, PhD, ’81 shared about the Power of Education: “Athletics and academics make an amalgam: a beautiful blend of two arenas that make better people.”

Vice President for Student Life and Dean of Students Dave Schaal, EdD, ’80, offered a prayer of dedication that was a poignant and fitting conclusion to an incredible event that brought together the Graceland community to celebrate generosity and the Power of Together.

The impact of the upgrades to the building are being felt across the campus, especially throughout the athletic department. The structure itself was always impressive, but leaks in the roof and drainage issues in the floor made for difficult conversations with incoming recruits as they toured the facility.

“It’s been a privilege coaching our wrestling team in the newly renovated Morden Center. Our athletes feel pride competing in front of our home crowd. I look forward to many more Yellowjacket victories in the Morden Center thanks to the generosity of the Morden family as well as many others,” said Zack Mullins, Head Men’s Wrestling Coach and Associate Director of Athletics. 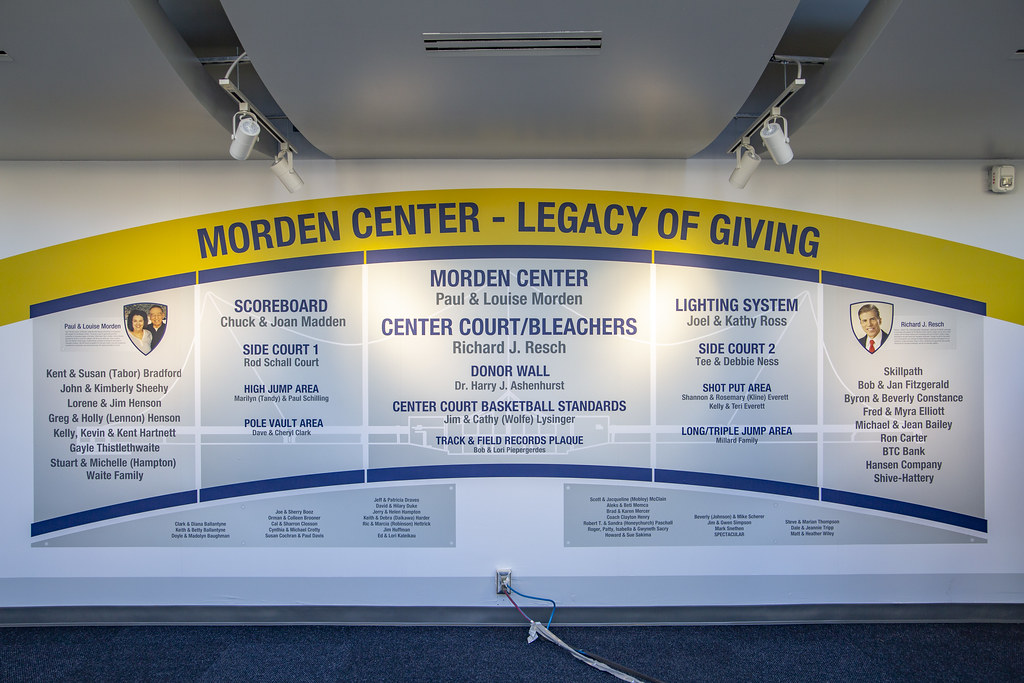 God, it is in this moment of relative quiet that we dedicate to you a building that we plan on being very loud in. We’re grateful that you speak through both the stillness and the quiet, but also the thunder. And so we ask that you bless the thunder of our noise that we will make in this space. The intensity of competition, the roar of crowds, the blasting of music — we pray that you would speak through the thunder of the sounds that we make to shape the lives that participate in this space.

The Power of Philanthropy

For 50 years, the iconic gymnasium has been the scene of countless moments in Graceland’s history, hosting a wide variety of athletic, academic, cocurricular, and community events. We honor the generosity of these Gracelanders and the impact of their legacy.

When Louise MacDonald ’43 Morden was a student at Graceland she tried to earn a varsity letter in every sport, and she failed in every attempt. However, Julia “Judy” Travis ’26 Closson recognized Louise as a special student. She told her, “Louise, you’ve worked harder than any other student to earn a letter. I want you to have this honorary letter.” That big G letter is displayed among her most treasured possessions to this day. Louise’s long connection to Julia Closson makes it fitting that the Morden family made the lead gift to renovate the Eugene E. and Julia Travis Closson Physical Education Center.

In the summer of 2021, thanks to the generosity of Louise and her late husband Paul Morden ’36, Graceland made much-needed updates to the iconic structure. The building, now called Morden Center, celebrated 50 years of service to the university this year and is the most heavily used building on Graceland’s Lamoni campus.

The Morden family’s long history of service and generosity to Graceland’s mission reaches back many years. They have provided funding for a multitude of initiatives, including the Community of Christ Seminary, Campus Ministries, and other capital projects like the renovations to Walker Hall and Newcom Student Union, where the Campus Ministries Suite is named in their honor. Louise now gives in honor of her late husband because they both had such fond memories of their life on campus together. “Paul would be delighted that our name is on the Morden Center,” she said. “He loved Graceland as I do and would be so happy to help so many students who use this facility.”

Louise remembers her time on campus fondly. “Graceland put me on a road to success,” she said, acknowledging the special connection that she has to the University. While the Mordens’ history with Graceland dates back even before Paul and Louise’s time on campus, their name is now a permanent fixture, a fitting honor to a lifetime of service. Graceland has been an important fixture in my life and in that of my late husband, Paul. To honor him, I am excited to share our love for Graceland with generations of students to come.

In October 2019, alumnus Richard J. Resch ’58 cemented his legacy of philanthropy to Graceland with a generous contribution to the Morden Center project. In acknowledgment of his lifetime of service to the Graceland community, center court and the bleachers will be named in his honor. In the summer of 2022, the Richard J. Resch Court will be installed alongside new bleachers, creating a completely new environment for Graceland’s athletic teams to compete.

Resch’s latest donation is another example of his consistent generosity to Graceland over many years. In 2009, he was the lead donor for the major renovation to the science building, now named Resch Science and Technology Hall. He also funded the Dan B. Kelley lounge in Gunsolley Hall in 2015.

That renovation honored his friendship with Dan B. Kelley ’58 and Dan’s wife, Sharon McCormick ’58 Kelley, his best friends from Graceland. “We spent a lot of time in that lounge and our close friendship continued for the rest of our lives until they passed away a few years ago,” Resch recalled. “I wanted to honor that place so students could enjoy it for many years to come.”

Although he got advanced degrees from both MIT and Harvard, Resch will always have a personal connection to Graceland. He followed his parents’ (Clifton ’33 and Lois Hatch ’32 Resch) footsteps to Graceland and had several other family members who attended as well.

“Between athletics, intramurals, and academics, it is obvious how important Morden Center is to Graceland students,” said Resch. “I am anxious to come back and see it when it is complete.” Graceland is proud to have generous donors like Richard J. Resch amongst its beloved alumni and friends. Graceland had a profound impact on me, shaping my learning interests and setting me on a course for professional success. It is with great pride and respect for the University that I make this gift.

Louise Morden holds few other professors in as high regard as Julia “Judy” Closson. She holds a treasured varsity letter to this day that she received from Closson when she was a student, despite failing in every attempt to earn a letter. As the transition from Closson Center to Morden Center is complete, the impact of the Closson family on Graceland will remain as treasured as Louise’s varsity letter.

Originally named the Eugene E. Closson Physical Education Center when it was built in 1968, Morden Center will continue to keep the Closson name at its heart. The north atrium entrance to the building will be named for the Closson family and their generations of service to Graceland. “Our family worked closely with Graceland and the Development Office on this project and were consulted from the beginning,” said Cal Closson ’82. “From our perspective, the iconic and practical aspects of the fieldhouse are what is most important,” Cal said.

The Closson Atrium also honors the service of Cal’s father, James Closson ’56, who passed away in the summer of 2021. Cal and his brothers, Brad ’86 and Jeff ’88, both also attended Graceland, as did many of their children. “And hopefully our grandchildren will be able to see my grandpa and grandma’s picture in this atrium when they attend in a couple decades, give or take,” Closson laughed and said. The generations of Clossons who have generously given their time, talents, and support for Graceland makes them a fixture in its rich history.

Those who attended the dedication of the Morden Center bore witness to the multitude of generous donors who adorn the donor wall at the Closson Atrium entrance. Their gifts ensured that Graceland students were able to enjoy Morden Center this academic year and put the University well on its way to funding phase two, which will complete the renovation by replacing the auxiliary floors, the track, and more. As a member of the Alumni Board and as a Closson, my blood has always been and always will be Blue and Gold. It has been an honor to have this building named for my grandparents for over 50 years.

The summer of 2022 is an exciting one for Morden Center as well. Phase two of the project will begin, including necessary civil engineering work outside of the structure. Changes on the inside include a brand new championship center court with upgraded bleachers, a new indoor track, and new flooring on the outer courts, which have been named in honor of coaching legends Stew McDole ’65, Rod Schall ’50, and Betty Welch ’48.